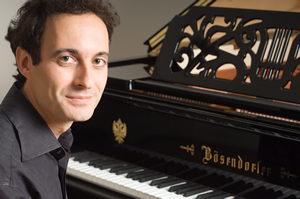 Though he received his first piano lessons at the age of six, Gianluca Luisi does not belong to those pianists who were already out in the limelight since their early childhood. Gianluca was given time enough to refine his remarkable skills calmly which is reflected in his brilliant and warm but always unobtrusive playing. After gradually gaining a tremendous experience as a performer and a remarkable number of appearances in major concert halls, he finally made his debut at New York’s Carnegie Weill Recital Hall in 2007 in front of an enthralled audience and the New York Concert Reviews, who said: “Luisi’s piano playing was astonishing in presentation. He is a very strong and imaginative artist, an excellent pianist who deserves world recognition.”

So far Luisi performed in Austria, France, Germany, Luxembourg, Malta, Portugal, Switzerland, in the United Kingdom and the United States, Japan as well as in his native Italy in prestigious concert venues including the Vienna Musikverein, the Liederhalle in Stuttgart, the Auditorium di Milano, the Teatro San Carlo in Naples, the Teatro Bellini in Catania, the Purcell Room at Royal Albert Hall in London, the Carnegie Hall in New York, the Bauman Auditorium in Portland and the Nagoya, Chubu and Kasugay Concert Halls in Japan. Furthermore he has been on stage at renowned festivals such as the Schleswig-Holstein Musik Festival, the Bachfest Leipzig, the European Music Festival Stuttgart, the Bach Festival in Köthen, the Bachtage Potsdam, the Saarland Music Festival and the Serate Musicali in Milan.

Gianluca Luisi has also teamed up with a number of conductors and orchestras; among them: Alun Francis, Enrico Belli, David Crescenzi, the German Chamber Orchestra Frankfurt (Deutsches Kammerorchester Frankfurt), the Dubrovnik Symphony Orchestra, the Orchestra del San Carlo di Napoli, the Orchestra Sinfonica Siciliana, the Orchestra Sinfonica Rossini di Pesaro and the Orchestra Filarmonica Marchigiana. Over and above his activities as a soloist he has established firm chamber music partnerships with violinist Marco Rogliano as well as with the Ensemble Concertant Frankfurt and the Chantily Quintet.

Gianluca Luisi has recorded for the Naxos, the MDG and the Centaur Records labels. Forthcoming recording projects will include both Piano Concerti by Frédéric Chopin in the version for piano and string quintet with the Ensemble Concertant Frankfurt for the MDG label, ‘Years of Pilgrimage’ by Franz Liszt for Centaur Records as well as a CD with violinist Marco Rogliano featuring the Sonatas of Austrian/German composer Ludwig Thuille on the occasion of his 150th birthday (coming in 2011 for Naxos).

Gianluca Luisi is particularly fond of playing the entire keyboard music by Johann Sebastian Bach. More recently he has done the entire cycle of the ‘Well Tempered Clavier’ in two nights from memory.

Recently in the Italian newsmagazine for Pianists “Suonare news”, the Great Pianist Aldo Ciccolini wrote: “Gianluca Luisi is one of the most interesting Italian pianist at moment”.

Gianluca Luisi is a Boesendorfer artist.

Second part: to be defined.

Gianluca Luisi is fond to present an exclusive Italian programme. From a selection of talented artists “made in Italy”, an “Italian” performance to bring to the world the beauty and the emotions of this wonderful country.

Franz Liszt – Années de Pèlerinage:
written by Liszt during his trip in Italy, with the company of Vicomtesse D’Agoult.

Concert performing the Complete Cycle of the Well Tempered Clavier: Book I and II.

Entirely by heart, he playes, in two concerts, the Complete Cycle of the Well Tempered Clavier of J.S.Bach.

Piano concert Op.11 no.1 or Op.21 no.2
(in the original arrangements for string and piano written by Chopin)

This programme is available from Naxos label as NAXOS catalogue 8.570984 in music  stores from October 2009 and, in future, in the collection “Liszt complete piano music”.

The Quartet Gigli owes its name to the memory of the famous tenor Beniamino Gigli, of one the best Italian Tenors ever. The Quartet Gigli musicians come from the best international chamber music and orchestra formations: Marco Rogliano, Judith Hamza, Luca Sanzò and Sabine Krams.

The critic in the newspaper spoke about a new Bach interprete:

“In a better world, Gianluca Luisi would be feted as the natural successor to Maurizio Pollini…”
(Lynn René Bayley, Fanfare Magazine)
“..He produces a music completely free, what else do you want?”
(Saarlandische Zeitung…)
“…Luisi’s piano playing was astonishing in presentation. He is a very and imaginative artist… an excellent pianist who deserves world recognition”.
(New York Concert Review, Carnegie Hall)
“…Brilliant Italian pianist at MCI inaugural concert; full of contrasting pianistic styles, lyrical and dramatic at the same time, this was an unforgettable performance”
(2001, The Sunday Times-Malta)
“…the young artist has not only outstanding technical abilities, but is also an extraordinary, excellent musician.”
(2004, Wolfsburger Allgemeine Zeitung).
“…a perfect balance of virtuoso performance and deeply felt musicality”
(2005, Saarbruecken Zeitung)
“…an evening with a worldclass pianist”
(2005, Nordbayrischer Kurier-Bayreuth)
Recently in the Italian newsmagazine for Pianists “Suonare news”, the Great Pianist Aldo Ciccolini wrote: “Gianluca Luisi is one of the most interesting Italian pianist at moment”.